By A Correspondent in New Delhi
July 04, 2009 10:35 IST
The Election Commission has now officially taken up the investigation of charges of rigging and fraud through the Electronic Voting Machines.

Chief Election Commissioner Navin Chawla is sitting over a major scandal of a possible massive rigging of elections by manipulation of software of the Electronic Voting Machines.

But for the charge levelled by a former Delhi chief secretary five years senior to him in the Indian Administrative Service cadre, Chawla would have rejected such claims of rigging.

Omesh Saigal, a 1964 batch IAS officer of the Union Territory, stunned him with a presentation to force him to order an inquiry into any possibility of such a rigging.

Chawla is himself a Union Territory cadre IAS of 1969 batch.

Deputy Election Commissioner Balakrishnan has been asked to conduct the inquiry on the basis of a report handed over by Saigal to the CEC, with a software he got developed to show how the elections can be rigged.

Saigal, who is an Indian Institute of Technology alumni, has demanded an urgent check of the programme that runs the EVMs used in elections since 2004.

He demonstrated with his software that its manipulation ensured that one has to just key in a certain code number and that will ensure every fifth vote cast in a particular polling booth goes in favour of a certain candidate.

In his letter to the CEC, Saigal alleged that the software written onto the EVMs has never been checked by the Election Commission ever since these machines were manufactured than 6-7 years back.

His contention is that the EC merely relied on the certificates supplied by the manufacturers, the government-run BEL and ECIL. He alleged that these government firms had subcontracted private parties who actually provided these certificates.

"A public software audit of these machines from time to time, especially after and before an election, was a must to retain the credibility of the elections," Saigal affirmed, demanding that for the sake of transparency names and ownerships of these private companies must be disclosed, as also the details of the factories where they were actually manufactured.

The records retained in the factories must also be immediately taken over by the EC to prevent any tampering and to facilitate an audit, he said.

He also pointed out how, after nearly two years of deliberation, Germany's Supreme Court ruled last March that e-voting was unconstitutional because the average citizen could not be expected to understand the exact steps involved in the recording and tallying of votes. Earlier, Ireland had given up e-voting for similar reasons.

In the United States too, after considerable controversy the Federal Election Commission has come up in 2005 with detailed voting system guidelines which run into more than 400 pages.

Saigal said that it is noteworthy that not a single safeguard mentioned in these guidelines are in place in India.

Saigal said he had gone into all the safeguards built into the e-voting system in India with the help of former colleagues and IT experts and finds it both 'possible and plausible' to rig these machines and get a crooked result.

"If the credibility of the electoral process is to be ensured,  pre- and post-election checks of the software now fused onto the chips of the EVMs is a must," Saigal said.

Saigal argued in his report that "if we cannot do this we must revert to the paper ballot."

"The need for a fair, free and transparent polling system transcends any reasons anyone may have to the contrary," he added.

A Correspondent in New Delhi
SHARE THIS STORY
Print this article 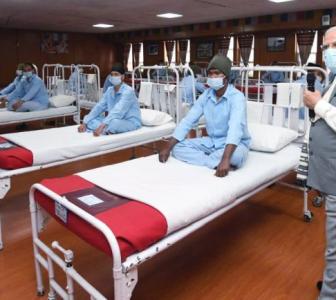 Tejashwi seeks to wash away RJD's sins with an apology

UP govt in line of fire over Kanpur encounter