McGrath: How the story unfolded 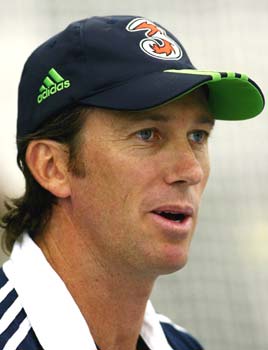 Following on the heels of teammate Shane Warne, Glenn McGrath announced on Saturday he was retiring from cricket after the 2007 World Cup in West Indies.

- The most prolific fast bowler in Test cricket history and the spearhead of Australia's bowling attack for over a decade.

- Third on the all-time list of wicket-takers behind spinners Shane Warne and Muttiah Muralitharan.

- Not the quickest fast bowler of all time, but specialises in unerring accuracy around off stump and good bounce and has achieved virtually every honour in the game.

- Was named Wisden Cricketer of the Year in 1998 and was a member of the Australian team that won the 1999 World Cup.

- Won the Allan Border Medal as Australia's best player for 2000 and took a test hat-trick against West Indies in Perth later that year.

- Won a second World Cup in 2003, taking career-best one-day figures 7-15 in a pool match against Namibia.

- Injured his ankle in 2004 but returned with a five-wicket haul against Sri Lanka at Darwin that year.

- Three months later, at Nagpur, he became the first fast bowler to play 100 matches for Australia.

- Later that year he took 8-24 v Pakistan in Perth, the second-best figures by an Australian in Test cricket.

- Became only the fourth bowler to captured 500 test wickets when he dismissed Marcus Trescothick in the first Ashes Test at Lord's in 2005.

- Was named man of the match after steering Australia to victory but stepped on a ball on the morning of the second Test and missed the match. Australia went on to lose the series 2-1 and the Ashes for the first time in 16 years.

- Took an eight-month break from international cricket in 2006 to care for his wife Jane after she was diagnosed with cancer for the third time.

- Returned to one-day cricket in October, helping Australia win the Champions Trophy for the first time a month later.

- Returned to Test cricket for the first Ashes match in Brisbane in November 2006, taking 6-50, to register his 29th five-wicket haul in tests.

- Helped Australia regain the Ashes after they won the second and third Tests to take an unassailable 3-0 lead in the series.

- Announced he would retire from test cricket after the Ashes series but would continue playing one-day internationals through to the World Cup, to be held in the West Indies in March and April.

What's India Celebrating In Its Sanyasa?