Announcing the details at a media meet in Hyderabad on Friday, STPI Hyderabad director Col Vijay Kumar said: "It has been a very eventful year for STPH (Software Technology Park Hyderabad) for several reasons. We have crossed the billion-dollar mark by clocking exports to the tune of Rs 5,025 crore ($1.11 billion). We have also surpassed the national average growth by registering an increase of 37 per cent over the previous year."

The STPH director, however, admitted that Hyderabad continued to rank at the fourth place among the STPI units. Bangalore topped the list, followed by Noida, Chennai and Hyderabad. Pune and Navi Mumbai ranked after Hyderabad.

"Our share in the total IT exports in the country has been around 8 per cent. Hyderabad is consistently ranking number fourth in terms of exports while it is number two after Bangalore in the number of registered units," he explained.

The number of units registered with STPI, Hyderabad, was 1,060, including 860 operating units and 200 units under gestation.

Although the total number of units registered with STPI, Hyderabad, rose to 1,520 with registration of 119 units in 2003-04, there was a decline in the number as on March 31, 2004, since 460 units were de-listed for assorted reasons during the year. Hyderabad ranked second after Bangalore in terms of number of units.

The cumulative investment in the IT sector in the state reached Rs 3,553 crore (Rs 35.53 billion), including Rs 684 crore (Rs 6.84 billion) invested by 42 foreign companies and 77 Indian companies during the year.

The STPH director said that with the substantial increase in the ITES sector, exports through datacom facilities increased to 82.15 per cent. The value of software exports through datacom facility was likely to growth further with increased bandwidths, wide global reach, access to new markets and new geographies and increased outsourcing activity to India, particularly in the call center, BPO and other ITES segments.

Though most of the exports (up to 63.15 per cent) were made to the United States and Canada, exports have shown an upward trend to other countries including the United Kingdom, the Netherlands, Japan, European countries, Australia, Asian and Middle Eastern countries. Exports to Europe, for instance, increased to 22.97 per cent of total turnover.

Vijay Kumar said that with the consistent efforts of the STPI and state government to give a boost ITES and BPO segments with special initiatives and approaches, the ITES exports increased to 46.70 per cent of total IT exports in 2003-04 from 39.16 per cent in the previous year.

"With several innovative measures, the ITES is poised to grow much higher in the coming years, particularly from the new secondary centers," he added.

"In fact, Hyderabad is emerging as one of the fastest growing IT centers in the country as a hub for outsourcing activity. Besides the existing MNCs, many more renowned companies such as Accenture, CA Computer Associates, Cavium Networks, Computer Science Corporation, Continuum (Bank of America group), Convergys, Franklin Templeton, Invensys Development, Kanbay Software, Pythian India, Qualcommm and Skyworks established their units in Hyderabad during 2003-04 and strengthened the Hyderabad IT and ITES industry," he pointed out.

At the same time, many of the new entrants such as Nipuna, Dell, 24/7, Cognizant, Capmark Overseas, Activecard, Sumtotal, Swift Response and Redpine Signals Inc  commenced and ramped up their operations during the year. Unlike the previous years, the last two years have witnessed the establishment and growth of a large number of embedded systems and VLSI design companies, thereby facilitating the Hyderabad industry moving up the value chain.

The STPH director admitted that the hardware exports from Hyderabad were worth only Rs 35 crore (Rs 350 million) during the year. The state government and STPH were, however, trying to give a fillip to hardware sector in the city. A hardware technology park has been set up near the upcoming international airport at Shamshabad on the city outskirts and a hardware IT policy has also been announced by the government for providing incentives to hardware units.

Syed Amin Jafri in Hyderabad
Source: PTI© Copyright 2022 PTI. All rights reserved. Republication or redistribution of PTI content, including by framing or similar means, is expressly prohibited without the prior written consent.
Print this article 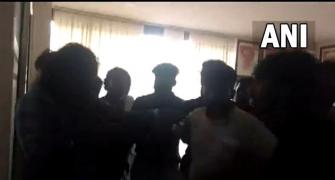