The Penguin (named Tux) is finally making inroads as an operating system on desktops too.

Novell along with the Electronics Corporation of Tamil Nadu is installing Suse Linux in around 40,000 desktops in the entire state.

Over 50 per cent of the estimated Rs 200 crore project -- which has been put up on YouTube too -- has already been completed, according to C Umashankar, managing director, ELCOT.

This is the second largest implementation of Linux on the desktop -- the biggest one being that of around 60,000 desktops in LIC of India by Red Hat, which is estimated to have implemented over 200,000 desktop OS installations. Canara Bank too has around 10,000 Linux OS desktops.

ELCOT migrated its entire IT infrastructure from Windows to SUSE Linux Enterprise Server and SUSE Linux Enterprise desktop. ELCOT is the implementing agency for the prestigious Tamil Nadu State Wide Area Network Project and is in the process of commissioning the state's data centre and disaster recovery centre too.

"We had to be sure that the Linux solution would meet all requirements. We decided to test it on our own internal systems and make an informed decision about whether it would be the right choice for schools and other government offices," said Umashankar, adding: "With SUSE Linux Enterprise, we no longer have any worries about viruses. This aspect of security used to be a real concern because we know of other e-government systems, which have collapsed because of malicious attacks."

Linux has over 300 variants, of which the offerings from Red Hat and Novell are the most popular because the firms provide support and maintenance -- the OS is free.

The growth of Linux on the desktop, according to analysts, has been stymied by piracy. Many people prefer to use pirated Windows OS on their desktops. However, since Microsoft is hardening its coming down hard on piracy, more users may opt for Linux since it reduces the cost of the PC.

The cost of the PCs is Rs 21,600 each (includes OS and a 19" TFT monitor). Linux, according to Umashakar, has helped ELCOT "reduce general hardware costs by nearly 25 per cent. In the case of high-end servers, the savings could be as much as 80 per cent."

With pre-built, virus-protected systems running open source software, Tamil Nadu's schools have a low-cost, highly reliable infrastructure that promises to deliver real savings in the years to come. Around 100 anti-virus licences have been rendered redundant.

ELCOT has also set up its own software development centre.

"Another big advantage of Linux is that you can experiment with different applications without making big investments. We soon designed a suite of applications, which will deliver all the functionality the teachers will need. We also have a 28-seat software development wing supported by SUSE Linux Enterprise on the server and desktop, fully powered by open source tools," says Umashankar. 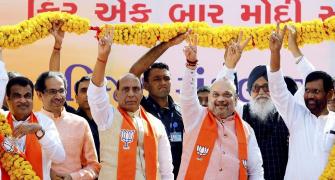