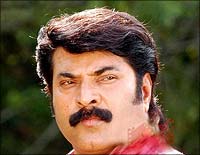 Director Ranjith's name conjures up images of larger-than-life heroes, sparkling dialogues and stylistic flourishes in the minds of Malayalam film viewers. Why then there is a collective squirm on our faces when we see the same images, stylistic flourishes and all that in his new film Prajapathi?

It is true that this film is a repeat of his older films; you see bits and pieces of almost all his successful films as a writer first and director later. But that does not mean Prajapathi doesn't work. The casting, the treatment of characters and the Ranjith stamp keeps us alert throughout, expecting something extraordinary to happen.

The story of Davarmathom Narayanan -- the character that Mammootty plays, the virtual ruler of a small hamlet that has kept all the vices of the modern world at bay -- is weaved with all the requisite elements to enhance drama.

The build up of the character is not far-fetched, but it is predictable -- the family disputes, the aides and the other paraphernalia have all been seen before.

The plot reminds of us of the recent Mohanlal starrer Naran, in which the hero makes the whole village toe his line of thinking by using muscle power. But in Prajapathi, Narayanan is more democratic; he conducts panchayats to punish people. The punishment awarded being exile from the village for a time span depending on the graveness of the crime.

Then there is the family angle; Narayanan has killed his father at the age of 13 (because he was very cruel to Narayanan's mother) and has served sentence in a juvenile home. But by the time the interval starts, he has been cleared of the crime.

His uncle (Nedumudi Venu) and cousins (Siddique and company) are his sworn enemies for obvious reasons -- wealth and property.

What wins the day for us are the actors. Mammootty is a towering presence in the whole scheme of things. Nedumudi Venu in a villainous role with a peculiar getup is seriously interesting.

Sreenivasan's presence in this film was hyped as being important, but he is just reduced to be his own caricature.

On to the females in the cast. Seema, who plays Nedumudi Venu's wife, is made to look and act as a witch from the fairytales. Aditi Rao, who plays Mammootty's love interest, has nothing to do with the overall plot. Sandhya, who plays a supportive cousin from the enemy camp, lightens up the screen with her presence.

There are plenty of stylistic flourishes. The firebrand dialogues, Narayanan's persona and a couple of other Ranjith trademarks -- like illegitimate sons and their wayward lifestyles -- make the grade, but are repetitive.

There is also the usual anti-tourism industry diatribe, mention of cola companies draining our water resources and the tirade against the political class.

On the whole, we would have been more appreciative of Prajapathi if we were not bombarded with the Ranjith classics like Narasimham, Aaram Thamburan and Ravanaprabhu on the telly every second weekend. So, you see who the real culprit is.

Security upped at Delhi border as farmers close in

FIR against Lalu for 'trying to poach NDA MLAs'