When Farhan Akhtar set out to remake Don, based on a film co-written by Javed Akhtar (with Salim Khan), he knew there would be a lot of reimagining involved.

In the third part of our exclusive feature where Farhan and Javed Akhtar sit back and talk Don with Prem Panicker and Raja Sen, the discussion moves to the importance of casting.

Part I: 'No one has said Shah Rukh was better or Mr Bachchan was better'

Part II: 'I am not shying away from the original Don'

Don, especially when compared with the films of that time, is unusual in that it is a very lean, low-fat film. Things move along very rapidly, almost rushed -- like, the impostor learning to walk like Don is just one scene, Roma's learning martial arts, they are all single scenes. Also, there is no comedic element, no extraneous stuff. Was that how you planned it; was it deliberate?

Javed: I remember when the film was released, someone from the film industry remarked that the whole film looks like a trailer. The tempo, especially for those times, was frantic.

Don remains an interesting film for me because unlike other films that have done well in the box office, Don is perhaps the only example in Hindi cinema that has done extremely well at the box office without any family sentiments, without getting into traditional melodrama, putting 'sentiment' into the plot.

Even where there is a possibility, like say between Pran's character and his children, for instance, one did not indulge in it at all.

Javed: Oh yes, because tempo was the key; that was the prime concern. So perhaps Don was perhaps the only caper movie ever made in this country that had no other emotions at all. None of the 'Hindustani' requirements were present at all -- and yet the film did well.

Perhaps that is why Farhan feels that this film is more conducive for a remake - because by this time, those elements, what I can only call Hindi picture requirements, have become almost obsolete, trite. So perhaps that is why Don is more suited to today's palate than some other pictures that were appreciated in their time.

On another note, you were asking Farhan about his films and the linkages between them. In a way it is paradoxical -- if an artist, who is a writer, director, whatever, doesn't have versatility that is a handicap. You have to have the prowess, the capability, to do different things.

But by the same token, if you don't have the style, a recognisable signature, if every time you are totally different, and the audience cannot identify your style, then it becomes a problem. So in that sense, the problem for creative people like Farhan is how to resolve this paradox; how to create and sustain a signature, a style, while avoiding the trap of being repetitious.

Then he made a picture about war, and about a young man who is in the process of becoming a Man, and then he has made this picture. On one level, they are very different from each other. But on another level -- and I have seen Don, so I can talk about that too -- they have his feel; there are certain aesthetics, there is a certain sense of decency, of cinematic excellence, that is the common thread in all three of his pictures.

So I think even when directors and writers change their genre, their sense of aesthetics, their sense of decency, their sense of morality will always be common to all that they do. In that sense, take a director with say certain crude values, let him make a historical film, or a contemporary film, or a comedy, or a family drama - that crudity will travel with him across genres, it will be his trademark.

Hrithik Roshan told one of my colleagues, Farhan, that he is damn glad you are at least one day older than him, because you intimidate him...

Javed: You are older than Hrithik?

Javed: He doesn't look that young!

The point Hrithik was making was that you have a firm grasp of the medium and two, that you know exactly what you want and who can give it to you, and you will not settle for less. What is it about your formative years that gave you this grasp, this control? How did it happen that in terms of cinema you are way ahead of your years?

Farhan: When I was young, I used to lie a lot, and I used to really believe my lies. There were very few people who could see through my lies - my Pa was one of the few.

Farhan: Right. And I was extremely addicted to my lies; I would make sure that people believed it. At the end of the day, film to some extent is about you creating a lie you want the audience to believe, and how good you are as a creator depends on how good you are at making people believe the lies you tell them. So I guess that thing about lying when I was growing up was my training ground. I've stopped doing that otherwise, now I channel all my lying into my movies.

The other thing people mention about you is your knack of building the right team for each movie. Like Mohanan on the camera for Don, for instance - when you signed him on, no one knew anything of him; no one would have put him in a list of top cinematographers like say a PC Sriram, a Santosh Sivan, a Madhu Ambat, Jeeva, KV Anand, Thiru... Yet you pick this tyro, and give him such a huge film...

Farhan: For Mohanan, this is his first Hindi film. He has worked on documentaries most of the time, and he is very big in the commercial film world. His style, to my way of thinking, is very real. He has no baggage in terms of being impressed by movies -- for him, it is all about getting the look right; he is not hung up on living up to anything. He is about creating the film's style in a systematic manner, and that works very well for me because people are doing their jobs, and they are only there to do the job.

With a lot of other people, the biggest problem is time, and the second is because they have been around, they have this awe of the stars. Also, they have this thing of wanting to impress on people that they are doing this big film. Mohanan doesn't have any such baggage, and that works great for me.

Mohanan in every sense of the word is an artist, he is very dedicated to what he does, and it is great to give him a platform where he has the freedom, where he gets everything he requires to tell a story, to show us a story the way he would see it. 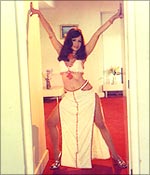 He is a very talented person - I saw his work in the ad world, I saw a few of the documentaries that he has worked on. I think the time was just right - from our end, in terms of finding someone who could give this film the right look and from his end, to be able to showcase what he can do in the feature film format, given the right opportunity.

Farhan: I don't think that is too out of the box, really. For me, when I was thinking back to that part, Kamini -- not the character itself, so much as Helenji playing that character (right)- what struck me is that here is someone who carried it all off with such grace.

Today, if ninety per cent of the actresses dressed the way she had in that song, with those green contact lenses and blond hair and the very short skirt slit all the way up to here, they would look extremely vulgar and extremely tacky. But she had the ability to wear whatever you put her into and still look sophisticated, dignified; she had that innate sense of dignity about her.

Kareena has that same quality. Maybe because of the family that she comes from, maybe because of a certain innate sophistication she has, maybe also because she is relatively under-exposed -- in the sense that you don't see her everywhere, she is not that public, she has a private side to her that we don't know about, that she does not share -- maybe because of all this, she has the knack of being able to carry off almost anything without ever looking vulgar.

Part I: 'No one has said Shah Rukh was better or Mr Bachchan was better'

Part II: 'I am not shying away from the original Don'

SSLV's 2nd flight likely in Q1 of this year: ISRO

This Diwali: Don vs Jaan-E-Mann