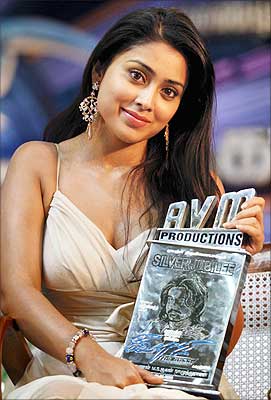 A local Hindu organisation in Chennai has lodged a police complaint against actress Shriya, who starred opposite Rajnikanth in the Tamil blockbuster, Sivaji-The Boss, objecting to the outfit (in the picture) worn by her during the 175th day celebration of the film.

The complaint was under investigation, they said.

Chief Minister M Karunanidhi had participated in the function, held on January 11, and given away mementoes to the actors and technicians of the film.

Apart from Sivaji, Shriya has also starred opposite Vijay in Azhagiya Tamil Magan, besides playing the female lead in the Hindi film, Awaarapan, opposite Emraan Hashmi.

Shriya is the second actor, after Khushboo, to face the ire of political parties and organisations in recent times. Khushboo had encountered protests for her reported comments on sex and virginity. The Hindu Munnani filed a case recently against her for showing disrespect to Hindu goddesses at a function in Chennai where she was photographed seated with her footwear on near some idols of the goddesses.

Source: PTI© Copyright 2022 PTI. All rights reserved. Republication or redistribution of PTI content, including by framing or similar means, is expressly prohibited without the prior written consent.
COMMENT
Print this article