I've always thought Devdas could only be told in black and white. For it is a bunch of flabbergastingly unidimensional characters -- drunkard, pining lover, courtesan -- that populate Sarat Chandra Chatterjee's essentially simplistic story, remarkable only for its wonderfully amoral, irredeemable titular protagonist.

Ushering colour into these monochromatic silhouettes has proved to be disastrous thus far, but Anurag Kashyap trailblazes in with a defiant new version that has only one aim, that to make your jaw drop.

Coolth drips from every frame, but we already knew this director as a man of extreme visual flair, and with trusted cinematographer Rajeev Ravi by his side, there was never any doubt that a film about a drugged-up Dev would look trippy beyond belief.

Kashyap's real surprise lies in the way he makes the story work, about how he avoids cinematic pitfalls and makes perhaps the most honest version of the character. In Dev D, Abhay Deol isn't charming like Dilip Kumar or melodramatically tragic like Shah Rukh Khan, but he is the character as he should be: the scumbag.

Nine minutes into Dev D, you realise that the director isn't aiming at an emotional connect with the hero, but instead trying to alienate you from him entirely. Gulping down that fact (with Thums Up or Coke, as you prefer) helps you kick back and revel in this utterly unconventional, marvellously immodest film.

Look, it's not as if you don't connect with any of them -- both the women traverse extreme character graphs -- but Dev himself is a wastrel you're really just meant to feel sorry for, and kinda sidle away from if he tries to borrow fifty bucks off you. 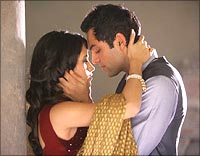 On seeing raunchy JPEGs of Paro on his computer, Dev breaks into a grin and Anurag stealthily switches languages, having his hero say 'Paro, main aa raha hoon' instead of its English, inevitably innuendo'd counterpart. Vile and violent are both muted and amplified unpredictably in the film, and a dialogue-switch like the one above shows us a director not just confident of his script, but trusting enough that his audience get the line without actually saying it and making them wince.

Enough such behind-the-obvious cleverness abounds in the film, and while there are many that might cringe at the film's three-hour running length, the best way to consume this long tall glass of cinema is by staying chilled. Dev D's real hero is responsible for this, and despite what the posters might tell you, that isn't Abhay Deol but the film's musicman, the astonishing Amit Trivedi who constantly juggles angst and allusion, profanity and pensiveness to make an awesomely heady cocktail that elevates the film itself to another level. The film's 18-song soundtrack is the narrative, really, bestowing the film with depth and nudging us, as viewers, in the right emotive direction even when the actors and lines themselves fail to get the job done. He's a master, this Trivedi, and the way Kashyap's used his songs is wonderfully appropriate, especially the rock version of Emotional Atyachaar.

Invariably sensory as the overall experience is, the film has its share of drawbacks. Stopping well short of revealing little scenes and details the joy of which should ideally be experienced first hand, I must wholeheartedly recommend you going to see this movie before pointing out its warts. Flaws hide in occasional lines, snatches of dialogue that seem forced, especially in a film that stays so close to the ground.

It's a stylistically arched world and not the one you and I live in, granted, but this is exactly why any deviation into filminess jars so painfully on the nerves. Let us not forget the film's Chanda, Kalki Koechlin and her strained dialogue delivery, responsible for the film's weakest moments, and even though she grows on you in the second half when bouncing off Abhay, she does let the film down. 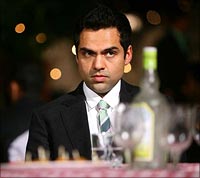 Mahie Gill, on the other hand, is absolutely super. As Paro (short for Parminder), she creates a character to connect with and admire, a ballsy free-spirit well in touch with her sexuality and delightfully unbridled of tongue. Naive at first, her Paro goes from eagerly laying mattresses in fields to giving Dev the cruellest of verbal spankings. Utterly befuddled here stands Dev, a broken man helplessly in love with a married woman, and Deol plays this reasonably well. Reasonably, we say, because the man truly does not have much to do. Abhay takes on an admittedly brave role and does it adequately, but save for a couple of scenes -- watch out for a particularly priceless moment with a bus ticket -- all he has is substance-abuse, chewing gum and, well, gham.

Greatness in terms of character-building, however, lies in the delectably smarmy pimp, played by Dibyendu Bhattacharya, a man who hands Dev his drugs and literally carries him to the courtesan's fuchsia bed. Chunni, they call him, and the character is the coolest analogy the film draws alongside the original text.

Hubris dominates the overall proceedings -- remember, this is not a bad thing by default -- but while Kashyap excels when he's going all-out, there are sequences when he decides to slow down, to explain, to simplify. Evidently he gives the audience credit but not quite enough, and looking at his track record, it's easy to see why.

Even so, this is a rather radical project, a film that could well have done more but accomplishes far more than enough, and I think the only reason we expect even greater things is that it really, really whets our appetite.

Randomness happens often in our newly-experimental cinema, but it's always great to see a film where no detail is an accident, where the director gets to execute his vision exactly as he wants -- and this seems pretty darned close.

See Dev D once, get bombed, see it again.

When A Country Goes Bankrupt...

Boris Johnson agrees to step down as UK PM 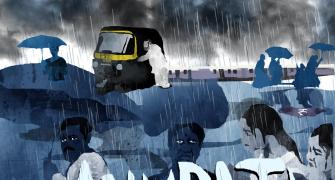 Dom's Take: Every Year In Mumbai

'Chanda is not as glamorous as Chandramukhi'