Even as the Students Islamic Movement of India appeared on the Mumbai police's list of suspects responsible for Tuesday's serial blasts, the Mulayam Singh Yadav-led Uttar Pradesh government gave the organisation a clean chit.

Declining to comment on the ban on SIMI, Chief Minister Mulayam Singh Yadav told the media in Lucknow on Thursday, "There have been two major terrorist strikes in Uttar Pradesh ever since we formed the government; and be it Ayodhya or the Varanasi blasts, SIMI was not remotely involved."

Referring to the central government's ban on SIMI, Shivpal Yadav observed, "Let the Centre first ban all terrorist organisations, then talk about SIMI."

While asserting that SIMI was not a terrorist organisation, the younger Yadav added, "Even I was once accused of being a SIMI agent."

Earlier, on June 23, the chief minister's secretariat shot off a letter to the state home department urging it to withdraw cases pending against more than a dozen SIMI activists facing trial for their alleged involvement in the 2001 Kanpur riots, 'in the larger public interest.'

The files in this regard are currently pending before the Kanpur police where officials are in a fix on the question of approving such a proposal.

The 2001 Kanpur riots left 16 dead, including a senior district official.

Significantly, the recommendation for withdrawal of cases against the SIMI activists was made by Samajwadi Party leader Surendra Mohan Agarwal, who as chairman of a public undertaking enjoys the status of cabinet minister.

A trader, Agarwal is an aspirant for the local assembly seat, which he is keen to contest the next election.

Asked to comment, Agarwal pleaded, "About 700 persons were arrested in connection with the 2001 riots and some of them are surely innocent, so I wrote to the chief minister to ensure that no innocent was jailed."

With the Mumbai police arousing suspicion over a SIMI hand in Tuesday's blasts, UP officials suddenly were on the backfoot over the withdrawal of the Kanpur riot cases.

While state Director General of Police Bua Singh declined to comment on the issue, Principal Home Secretary Satish Kumar Agarwal told the media, "The ban on SIMI was issued by the central government under the provisions of the Unlawful Activities (Prevention) Act, 1967 and we are monitoring it very closely."

"We have carried out raids at certain places to ensure effective imposition of the ban," the principal home secretary added.

He refuted some reports highlighting that the lethal RDX used in the Mumbai blasts was forwarded by a SIMI module in Kanpur. 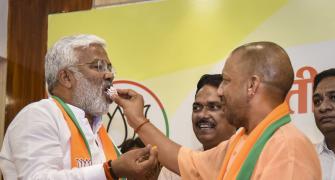 Bypolls: Major BJP win in UP; AAP loses in Punjab 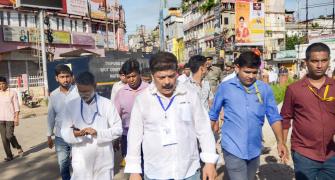 Tripura Cong chief among 19 injured in clash with BJP

Setback for AAP in Punjab as it loses Sangrur seat

Just, what is SIMI?