'Never trust the US on Pakistan'

By B Raman
July 21, 2006 18:50 IST
There has been considerable disappointment in India over what is perceived as the continuing US reluctance to act against Pakistan for using terrorism against India.

The negative attitude of President Bush and the US State Department in the wake of the Mumbai blasts of July 11 is nothing new. Protection of Pakistan from the consequences of its wrong-doing against India has been a consistent element in US policy-making towards India and Pakistan ever since our independence in 1947 -- whichever party was in power in Washington, DC.

To illustrate this, I am giving below instances, which were within my personal knowledge as an officer of the Intelligence Bureau from July 1967 to September 1968, and of the Research and Analysis Wing (R&AW) from September 1968 to August 31, 1994:

The Sino-Indian war of 1962 brought out the serious inadequacies in the IB's capability for the collection of technical intelligence about China. After obtaining then prime minister Jawaharlal Nehru's approval, the IB sought the assistance of US intelligence for strengthening its TECHINT capability.

US intelligence, with the approval of John F Kennedy, then the US president, agreed to supply the required equipment and train IB officers who would be using this equipment. However, it imposed a condition that this equipment would be used only for the collection of TECHINT from China and not from Pakistan. When R&AW was formed in September 1968, with the late Rameshwar Nath Kao as its head, the division handling this equipment was transferred to R&AW.

In the 1970s, Kao visited Washington, DC at the invitation of the then director of the Central Intelligence Agency to discuss Indo-US intelligence cooperation.

Some years later, Kao told me that during his discussions in Washington DC, the CIA chief told him as follows: 'Ramji, we all cheat in this profession. I know R&AW will cheat and use the equipment given by us for the collection of TECHINT about Pakistan. Make sure our State Department does not come to know of it. If it does, the State Department will demand that we cancel our cooperation with you and withdraw from you the equipment given by us. I will have to do this.'

Between 1981 and 1984, Khalistani terrorists hijacked a number of Indian Airlines aircraft to Lahore. When one of these aircraft landed in Lahore, Pakistan's Inter-Services Intelligence found the hijackers had no weapons.

They had intimidated the pilot into flying to Lahore by claiming that they had a weapon which they would use if he did not obey their instructions. The ISI gave the hijackers a German-made revolver. They used that revolver to intimidate the pilot to take the plane to Dubai. The Dubai authorities terminated the hijacking, seized the revolver from the hijackers and handed it over to the Indian authorities.

The State Department was not prepared to accept this as adequate proof of Pakistani sponsorship of terrorism against India.

After the Khalistanis took to terrorism in 1981 with the ISI's assistance, the IB and R&AW collected a lot of intelligence regarding ISI training camps in Pakistani Punjab for the terrorists, the arms and ammunition supplied by the ISI to the terrorists etc.

Whenever we produced this intelligence before the US authorities and requested them to act against Pakistan, they would reject it on the ground that the intelligence was gathered during interrogation of suspects, who must have been tortured by the Indian police.

When we produced technical intercepts, they would reject them on the ground that it was difficult to prove their authenticity.

One Western agency even collected intelligence that the ISI had given shelter in Pakistani territory to Talwinder Singh Parmar, the leader of the Babbar Khalsa in Canada, who was actively involved in blowing-up the Kanishka.

I did so, and told my counterparts: "Look, I have not been able to convince the CIA about the Pakistani sponsorship. Every time I produce any intelligence, the CIA rejects it on some ground or the other. You have collected your own independent intelligence. If you share it with the CIA, it would find it difficult to reject it."

All my interlocutors gave me identical replies: "We know the CIA has more intelligence regarding the Pakistani sponsorship of terrorism against India than all of us together have. The CIA was convinced a long time ago about the ISI's sponsorship of terrorism. The problem is not with the CIA. It is with the State Department, which does not want to act against Pakistan."

In the early 1990s, Lal Singh alias Manjit Singh of the International Sikh Youth Federation clandestinely came to India from Pakistan. The Gujarat police arrested him. He was wanted in a number of cases in India, the US and Canada.

I informed my counterparts in the Canadian and US intelligence that they could send their officers to interrogating him. I assured them that no Indian officer would be present during the interrogation. The Canadians availed of the offer and sent a police officer to interrogate him. The US agencies decided not to avail of the offer.

I came to understand later that the State Department advised them not to send anybody to interrogate him. It was apparently afraid that if Lal Singh gave the US interrogator details of the ISI's role, it would find it difficult to reject his evidence as possibly obtained through torture.

In 1992, under the instructions of (then prime minister P V) Narasimha Rao, the IB, R&AW and the ministry of home affairs mounted a coordinated campaign to make the international community and US political and public opinion aware of the Pakistani sponsorship of terrorism against India.

The IB and R&AW prepared a detailed dossier giving details of all the evidence collected by them against the ISI. A team consisting of two officers of the home ministry and one from the IB was sent to Washington to hand over copies of this dossier to the US authorities and request them to declare Pakistan as a State sponsor of terrorism.

After doing so, they also presented the dossier at a press conference at the Washington Press Club. The State Department summarily rejected the dossier.

In 1992, terrorists belonging to the Jammu & Kashmir Liberation Front attacked a group of young Israeli tourists, who had gone to J&K. They killed one of them and kidnapped another, who was subsequently released. Following this incident, Jewish circles started criticising the unsympathetic attitude of the US towards India's complaints against Pakistan.

Just before the presidential elections of November 1992, President George H W Bush, the father of the present president, reportedly ordered a second look at the dossier against Pakistan submitted by India.

The officials, who did so, reportedly recommended that instead of declaring Pakistan a State sponsor of terrorism, it could be placed in a list of suspected State sponsors of terrorism. Bush, who lost the election to Bill Clinton, did not act on the recommendation. He left the decision to his successor.

After assuming office in January 1993, Clinton placed Pakistan on a list of suspected State sponsors of terrorism. The weighty nature of the Indian dossier played a role in this decision, but there was a more important reason. The CIA had developed a strong dislike of Lieutenant General Javed Nasir, the then director general, ISI, for not cooperating with a drive launched by it to persuade the Afghan mujahideen to sell back to the US their unused stock of Stinger missiles, given to them for use against Soviet troops.

The US used the Indian dossier to force then prime minister Nawaz Sharif to remove Javed Nasir and some other ISI officers, whom it looked upon as uncooperative in its efforts to buy back the Stinger missiles. Nawaz Sharif complied.

Benazir Bhutto, who was then the leader of the Opposition, rang up Peter Galbraith, son of former the US ambassador to India J K Galbraith, and some other university mates of hers, who were close friends of Clinton, to request them to see that Pakistan was not declared a State sponsor of terrorism.

She told them she expected elections to be held in Pakistan later that year and that she was confident of coming back to power. She assured them that if she came back as prime minister, she would stop the ISI's use of terrorism against India.

In July 1993, Warren Christopher, the then secretary of state, announced that the US had decided to remove Pakistan from the list of suspected State sponsors of terrorism for want of adequate evidence. Benazir Bhutto won the elections in October 1993, and returned as prime minister. But she did not ask the ISI to stop the use of terrorism against India. R&AW must have in its archives the transcripts of Bhutto's telephonic conversations with Peter Galbraith and others.

During the investigations into the serial blasts of March 12, 1993 in Mumbai, the IB and R&AW collected the following evidence regarding the involvement of the ISI:

All this evidence was rejected by the US as falling short of proving Pakistani complicity.

They said the Government of India could use their report for any purpose it desired.

American counter-terrorism experts, who visited Mumbai at our invitation, saw the timer and said that it looked like timers manufactured in the US. They wanted to take it to the US for forensic examination. They promised they would return it after the examination. I agreed to it.

After some days, they sent me an unsigned report on a plain piece of paper that the timer had been manufactured in the US and was part of a consignment given by the US to Pakistan in the 1980s.

I pointed out this was the smoking gun which they had been asking for and said they should now be able to declare Pakistan a State sponsor of terrorism.

They said this was not sufficient evidence against the government of Pakistan. They claimed that there were instances of leakage of arms and ammunition from Pakistan government stocks into the hands of arms smugglers and contended that the terrorists could have procured it in the smugglers market. They also said their report could not be used by us in a court of law.

When I asked them to return the timer, they claimed their forensic laboratory had destroyed the timer by mistake and that they were taking action against the lab for negligence.

After my retirement, I used to narrate to Kao and others how the Americans cheated me by destroying the timer. Once, Kao asked: "How were you so naive in trusting them and handing over the timer to them? One should never trust the US in matters concerning Pakistan. The US will never act against Pakistan for anything it does to India."

This is as valid today as it was in the past. 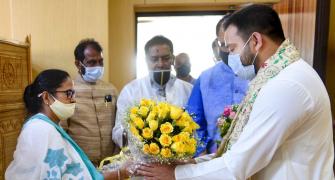 Why is the US indulging Pakistan?