A 'fatwa' against terrorists attacking places of worship

The Lucknow based institution issued the fatwa on an application moved by local businessman Sajid Umar, who had sought Firangi Mahal's verdict on the issue.

According to Firangi Mahal chief Maulana Khalid Rasheed , who was also the Imam of Lucknow's Idgah, "Sajid Umar wanted to know what Islam had to say about those people who were attacking places of worship and killing innocent people in cold blood."

The Maulana ruled, "There was absolutely no room for terrorism in Islam and murder of one innocent person amounted to murder of entire humanity."

Quoting from the 32nd 'Ayat' of 'Sur-e-Mayda' in the Holy Quran, he pointed out, "God has very explicitly stated that if any human being kills any other human being, he would be guilty of murdering humanity."

Rasheed told this scribe, "I further pointed out that in this reference, the Holy Quran does not talk about any particular religion; it is a reference to the entire humanity."

Quoting yet another excerpt from the Holy Quran, he added, "Ayat 107 under 'Sur-e-Ambia' chapter of the Quran says that the Prophet's objective is to ensure well being of the entire universe, which includes not only human beings, but even animals, trees and plants."

He said, "It is notable that the Prophet never reacted violently even against those those not only attacked him in various ways but also tried to cause physical harm to him; the Prophet was also totally against causing the slightest harm to any place of worship, belonging to any faith."

While emphasising that, "Islam has always laid stress on peace and harmony," the Maulana's fatwa added, "If any Muslim causes harm to any place of worship of indulges in killing of innocent people, Islam would regard it as the worst possible crime and the Shariat would consider it absolutely unlawful."

Sharat Pradhan in Lucknow
SHARE THIS STORY
Print this article 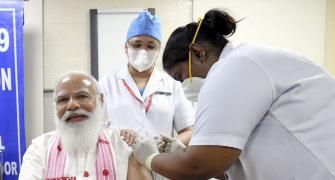