News
Business
Movies
Sports
Cricket
Get Ahead
Money Tips
Shopping
Sign in  |  Create a Rediffmail account
Rediff.com  » News » What the US election results mean for India

What the US election results mean for India

By T P Sreenivasan
November 09, 2006 14:54 IST
The last time I watched US election results was back in 2000 from a Las Vegas hotel room. The television was on throughout the night and each time I woke up, the results appeared different. The overwhelming thought was not the enormity of the change, but surprise over the sheer inability of the SuperPower to manage an election without snags.

This time, as I followed the election results from a Washington hotel room, the thought was not very different. The results were, as expected, a severe setback to President George W Bush, but the number of glitches in the voting and counting machines, which interfered with the prompt expression of the will of the people was amazing. The system is not even scrutinised in the case of clear verdicts and consequently, no serious effort is made to fix the systemic problems.

The media had alerted the government to the possibility of malfunctioning machines long before the elections. People had suspicion not only that machines might malfunction, but also that they might be manipulated.

Curiously, neither the electoral officers, nor the manufacturers of the machines cared to assuage the concerns of the public in this regard. Even an invitation extended by a television channel to a representative of the association of voting machine manufacturers was rebuffed. All the latest computers in the world cannot guarantee accuracy and speed for the electoral process in the United States.

On the morning after, the results of the election to the House of Representatives were clear enough, but the position of the US Senate was unclear and, with the possibility of a recount in Virginia, it appeared as though the results would not be available for as long as a month.

A recount is a simple matter, but interminable legal battles will ensure that it will be a legal decision rather than an electoral one. Like the proverbial ambulance chasers, lawyers will arrive in Richmond and raise so many issues that the recount will be delayed.

Undoubtedly, the elections were a referendum on President Bush, particularly his Iraq misadventure, but it is precisely on Iraq that the Democrats still do not have an alternate policy. Nancy Pelosi's agenda for her first hundred hours in office does not even include Iraq.

One thing that the Democrats can do is to cut off funding for the Iraq war to force the President to withdraw, but the Democrats cannot afford to do that mistake, having seen that even a botched up joke on the soldiers in Iraq could drive John Kerry into hiding.

The farthest that the Democrats would go is to say that they would like to adopt an alternate approach, possibly on the basis of the Hamilton-Baker report on Iraq. In her first press conference, Nancy Pelosi, as the new voice of the people, spoke only about a bipartisan approach to Iraq and the need to fire Defense Secretary Rumsfeld. She was careful not to sound critical of the fighting forces in any manner.

It turns out that Iraq was not even the main issue that decided the outcome of the elections. Among the factors mentioned, Iraq (36 per cent) comes only after corruption and ethics (41 per cent) and terrorism (39 per cent).

It was scandals like aggressive homosexuality and indiscreet business deals which demolished Republican incumbents. A powerful Senator in Virginia suffered immensely for calling an Indian on the staff of his rival 'macaca' (monkey).

Congressman Mark Foley's folly of sending a suggestive e-mail to a young man on the Congressional staff hurt him and his replacement on the Republican ticket. But if terrorism and homeland security are still concerns, the Bush record is not unsatisfactory. He has ensured that anything like 9/11 never took place in the US in the last five years.

India was never mentioned in the elections, but India watchers and Indian Americans are curious about the fate of the Indo-US nuclear deal and the future of bilateral relations. The Democratic party has more Indophiles than the Republican Party, but it also has more non-proliferationists.

In the wake of the 1998 tests, friends of India of long standing in the Democratic Party were extremely critical of India. Many of them were apprehensive of the Indo-US nuclear deal and they went along with the related bills in the House and Senate Committees only after the non-proliferation concerns were incorporated in them.

Senator Hillary Clinton was non-committal on the deal till the modified bill reached the Senate, much to the chagrin of her Indian-American supporters.

The Bush administration is still hopeful that the lame duck Senate will still approve the deal and a bilateral agreement will be possible soon. But with the President himself rendered lame duck by the elections, it remains to be seen how the deal will fare in the session of the old Senate.

But for the rest of Indo-US relations, the President and Congress will work together as there is bipartisan support for good relations with India. One new area of cooperation should be the management of men and machines during the elections!

T P Sreenivasan, who recently retired from the Indian Foreign Service, was India's ambassador to the United Nations, Vienna, and governor for India, International Atomic Energy Agency, Vienna. He also served at the Indian embassy in Washington, DC, as Deputy Chief of Mission. 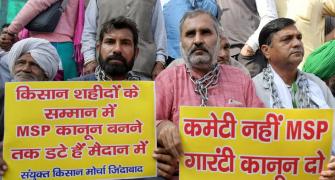 Watch Live! All the action in Parliament

'Modi is the political product of Ayodhya agitation'

Democrats willing to take up N-deal in Senate

Bush vows to get N-deal done