The Dalai Lama on Tuesday showered praise on revolutionary Chinese leader Mao Tse Tung, but lashed out at subsequent governments in Beijing for allegedly subjugating  Tibetans.

Mao was almost like a father to me. I sought a lot of advise from him and he promised me wonderful things. We developed great friendship," the Dalai Lama said, inaugurating the seven-day International Satyagraha Conference in New Delhi.

The spiritual leader said he had about 15-20 meetings, some official and some private, with the Communist Party chairman in 1954-55. The Dalai Lama claimed that Mao even promised him that he could approach him anytime if the military posted in Tibet was not listening to the Tibetans.

"Mao even promised me that he immediately withdraw military from the region."

"In 1956-57, when I wrote to him twice or thrice as the military became harder, but there were no response," he said. The Lama claimed there was a difference in his fight for freedom and the Indian freedom struggle.

"The Mahatma fought for freedom from inside while I had to fight it from outside," he said.

He said Indians fought the struggle for independence in more freedom while the Tibetans were struggling in a scenario "where there is no independent judiciary or free press. Everything is very rigid".

Flaying China, the Tibetan spiritual head alleged there was no independent judiciary or press in the country where the government was running a propaganda machine against Tibet.

Source: PTI© Copyright 2021 PTI. All rights reserved. Republication or redistribution of PTI content, including by framing or similar means, is expressly prohibited without the prior written consent.
SHARE THIS STORY
Print this article Gasping for Time: Do Not Run Out On Us 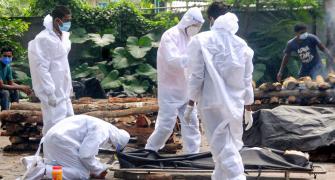 'You can't blame the people of India!