Last updated on: December 23, 2006 19:14 IST
Roger Federer swapped his tennis racquet for a cricket bat on Saturday to the delight of scores of child survivors of the Asian tsunami in India.

The Swiss world number one, a UNICEF goodwill ambassador, hit a tennis ball with the wooden bat bowled by enthusiastic boys at a permanent shelter camp in Cuddalore district in the southern state of Tamil Nadu.

Around 8,000 people were killed in Tamil Nadu when the tsunami slammed into its crowded coast on Dec. 26 2004. Tens of thousands including many children were made homeless. 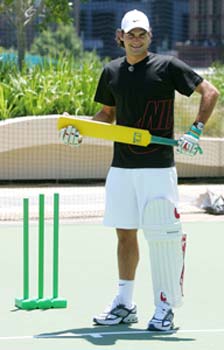 In the Pudupettai rehabilitation colony, 180 km south of Chennai, the state capital, hundreds watched the improvised cricket game played on an old red coir mat that was placed on a makeshift pitch.

"It was good fun playing cricket here," Federer on a two-day UNICEF trip to the region, told Reuters after knocking a few balls that drew huge applause from tsunami survivors.

"I know the sport is huge here. I follow it myself," said Federer, whose mother is South African.

"In the beginning they threw the ball at me slowly, and then realised that I was not that bad after all.